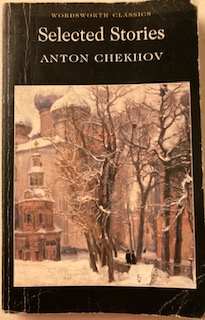 Anton Chekov is one of my favourite authors of short stories.

His way of describing situations, persons, ambiances, and the core of the situation is remarkable detailed and wonderful.

And to me as an improviser and host of workshops, these descriptions are very useful.

Why, I will try to explain why.

There is a tendency amongst improvisers to spontaneously respond with something verbal, instead using the powerful tool of nonverbal communication.

I refer to Chekhov’s works to encourage improvisers to find other ways to react than verbally in improvised theatre. I suggest that improvisers read some of his short stories and, now this is important while reading that they notice the places where Chekov describes the progression of the narrative by the physical actions of the persons in the scene. The way Chekov uses these descriptions creates depth and form to the imagery of the readers, and he also uses this technique to create suspension and drama.

I am thinking, why don´t improvisers implement this technique in their way of expression on stage, working with this technique will give depth and character to both the person they are portraying and the scenes they are part of, and the theatrical narration will obtain another dimension.

An example? Read it, be inspired, and then improvise the tramps actions.

Here is the end of Chekov´s short story “Dreams”.

“It is quite true that you could never get there.” Ptaka assents.

“You are not a walker! Look at yourself-all skin and bone! It would kill you, brother.”

“Of course, it would kill him; he couldn´t possibly do it.” Declares Nikander. “He´ll be sent straight to the hospital, anyway, as it is. That´s a fact!”

The nameless wanderer looks with terror at the stern, impassive faces of his evil-boding fellow travellers, lowering his eyes, he rapidly crosses himself without taking off his cap. He is trembling all over, his head is shaking, and he beginning to writhe like a caterpillar that someone has stepped on.

“Come on! Time to go!” Cries Nikander rising.” We have rested long enough!”

Another minute and the travellers are plodding along the muddy road. The tramp is stopping more than before and has thrust his hands still deeper into the sleeves of his coat. Ptaka is silent.

SHH “I love the characteristics of A. Chekov´s short stories and love to transfer them to improvised theater!”

Here is a description:

What are some characteristics of Anton Chekhov’s short stories?

Often described as ambiguous, lyrical, bizarre, humorous, and even haunting, Anton Chekhov’s works cover a broad spectrum of human emotion and spirit. A Chekhovian short story or play points to — but refuses to open — the cupboard where the skeleton is concealed; rather, secrets are slowly revealed.6. okt. 2016